As a User Interface (UI)/User Experience (UX) Designer, I’m always looking for ways to improve my designs and learn from them. I want to run this study because, if I find a pattern, I could re-define UI design everywhere and create a standard for minimap position on a screen.

A minimap is a UI element on the screen that displays the player's current position. It can also display other information such as enemies, resource locations, and allies. It’s useful for games that require the player to know their position at all times. Competitive games are the most common games to have a minimap. However, there are single player games with a minimap. Minimap positions vary from game to game and, during my initial research, I found games with a minimap everywhere from the four corners, to overlays, to lower center part of the screen.

Ocular dominance is an effect in people and animals with 2 eyes. It is when the person prefers to take visual input from one eye over the other. Current research suggests that about two-thirds of the population is right eye dominant while the other third is left eye dominant. Note that a person can be neither right or left eye dominant and ocular dominance can be swapped if the eye is trained enough (“Ocular Dominance”, 2017)
​
This study is to determine whether or not ocular dominance plays a role in where a player prefers their minimap on the screen. After my initial findings, I hypothesised that a person prefers the minimap on the side of the screen equal to the side of their dominant eye.

My subject pool is biased. I asked a total of 50 people during my study and found them at DigiPen. I did 2 quizzes and asked 25 people each time. If I were to do this in a full scale study, I would want to ask much more people in various settings. I would want to find people in coffee shops, malls, game stores, and even public parks and events. I would want to get the general populous and not just gamers.
​
Like I said, I asked 50 people. Mostly men (because DigiPen is about 80% male) of all different ages and backgrounds. However, I did not survey people younger than 18 years of age.

In terms of space, I took the survey inside of DigiPen in Redmond, WA. I asked people in various spaces. Most of them I asked while they were in their everyday work space. Some of them I asked while in the Cafe at DigiPen. It’s a low stress environment where they can think about their answer. However, they might have been distracted with food or other conversations.

In terms of equipment, I had a notebook that I recorded results in and a couple pieces of paper to show them the different minimap locations. Nothing intimidating but bias could be influenced with the order in which the subject was presented the minimaps.
​
When asking people about their ocular dominance, I asked the question “do you know your ocular dominant eye. If so, which is it?” If they were confidant in which eye they were dominant in (if they responded within a couple seconds) I trusted them and wrote it down. If they were at all hesitant, I would test them by asking them to extend their hands, make a football shape with their hands, and put my head in it. Once they did that, I could see which eye they were looking out of. This is their ocular dominant eye.

During the first test, I went around with my notebook and 2 screenshots of DOTA 2 on the same paper (see Appendix A). The screenshots were identical except for the position of the minimap. In one image, the minimap was on the bottom right and the other had the minimap on the bottom left. I asked the subjects for their ocular dominant eye and then asked them which position of the minimap they prefered. Once I got answers from a group of subjects, I would relocate to another group and ask them.
​
The second test was pretty similar but involved my attempt to remove bias. I went around with my notebook like normal and 4 different papers with 4 different minimap positions (see Appendix B). Each paper had a grey box and an obscure minimap that I found on Google Images that no one would recognise. This way, people wouldn’t bring their pre-existing knowledge of the game’s minimap position into the answer. I asked them for their ocular dominant eye like the previous test and then laid the 4 papers in front of them. They examined the papers and then gave me a single answer. Every now and then, I would switch up the order in which I presented the minimaps to remove bias in that direction. After I got answers from a group of subjects, I would them relocate to another group.

This test was a good start to a much deeper topic. My hypothesis was that ocular dominance played an important role in which corner of the screen a person prefered their minimap to be in. However, because my test was shallow and fairly biased, I don’t think I can make any definitive conclusions. I did, however, come up with a new hypothesis. After listening to all the subjects tell me why they liked (or didn’t like) a particular corner (even though I didn’t ask them) I think video game history plays a big role. People who play a lot of World of Warcraft might like the top right corner minimap better.

But back to the tests, I liked that I asked 50 people. This is a decent handful for a quick student study. However, I was originally planning on going to our local mall and asking people there. But, because of other school work, sickness, and presenting my game at alt.ctrl.GDC, I was unable to. I would have liked to ask a total of 100 people. But I used what I had.

This test was also very biased. I asked a bunch of gamers that are working their way into the games industry. This means that they have played more games than a normal person and they know how they work. When they play League of Legends, they know that the minimap is the most important part of the UI.
​
Overall, I think this was a good informal test and I wish I had the time to continue my study in a more professional environment. But, due to time constraints and the requirement to turn something in, I cannot.

Test 1 Minimaps
This is the paper that I showed people for test 1. The paper has 2 versions of a DOTA 2 HUD with the minimap on different sides. 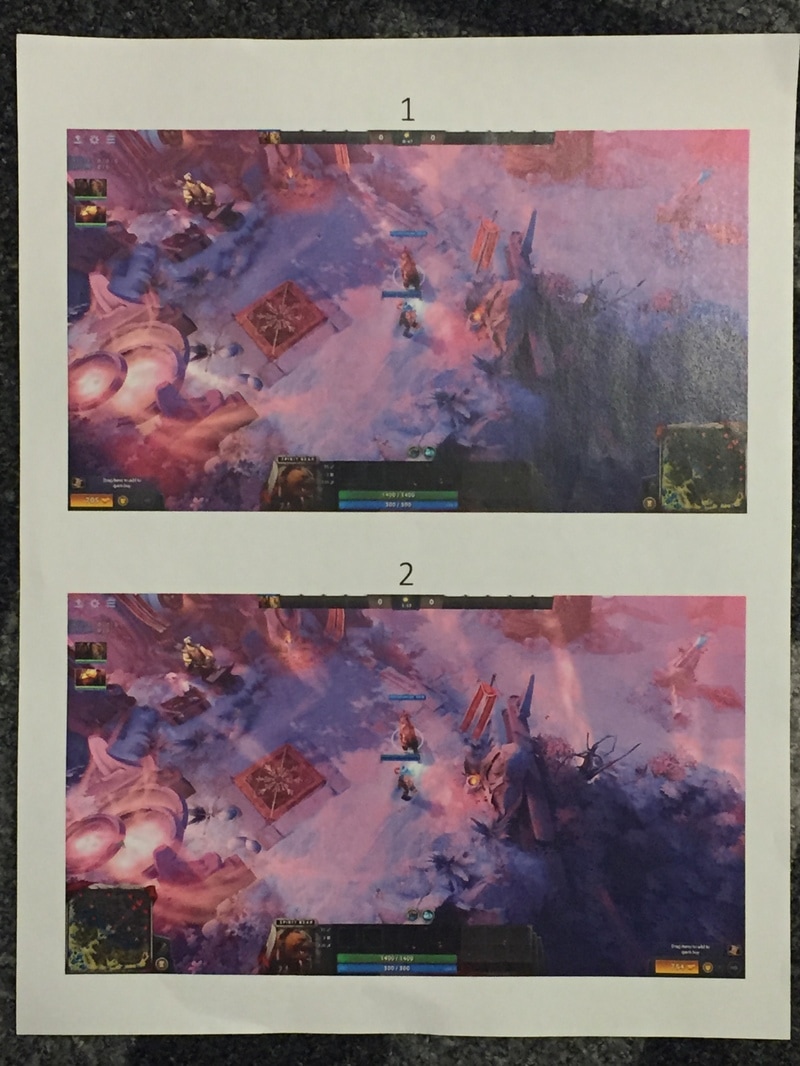 Test 2 Minimaps
This are the papers I showed people for test 2. These papers are identical except for the position of the minimap within the grey box. 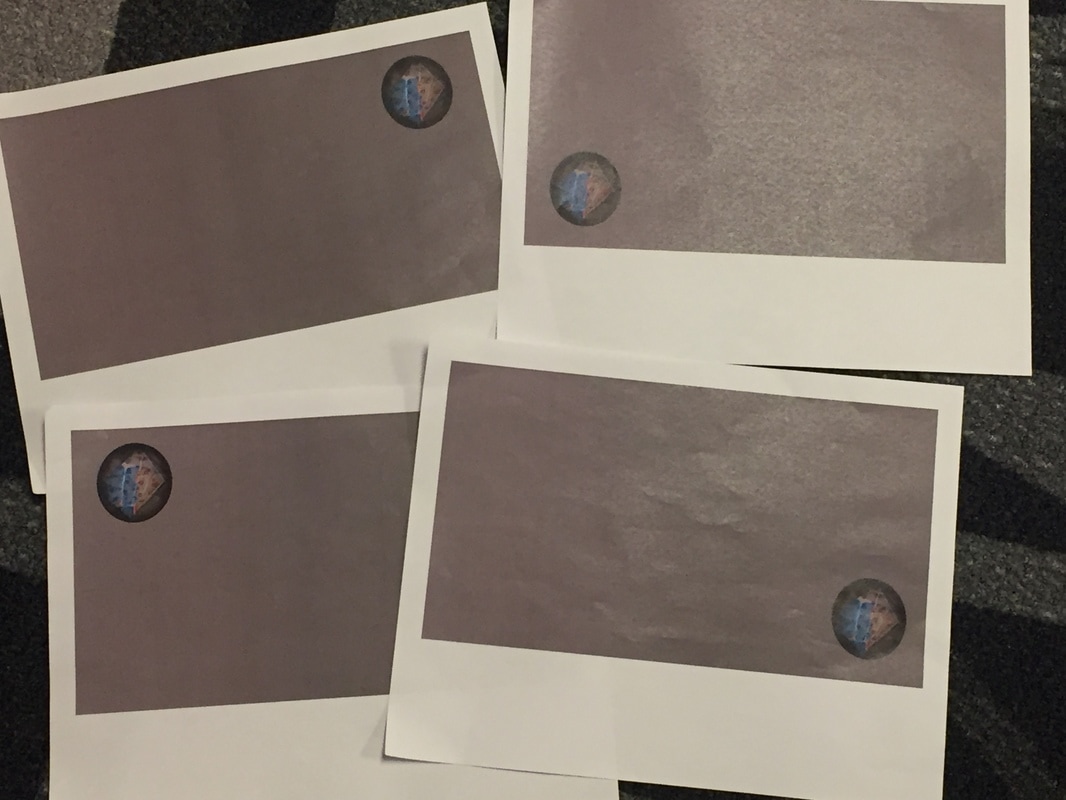 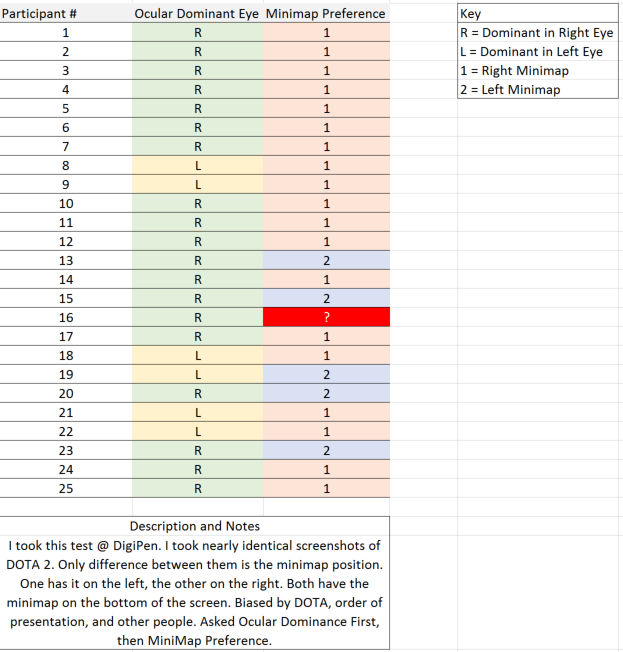 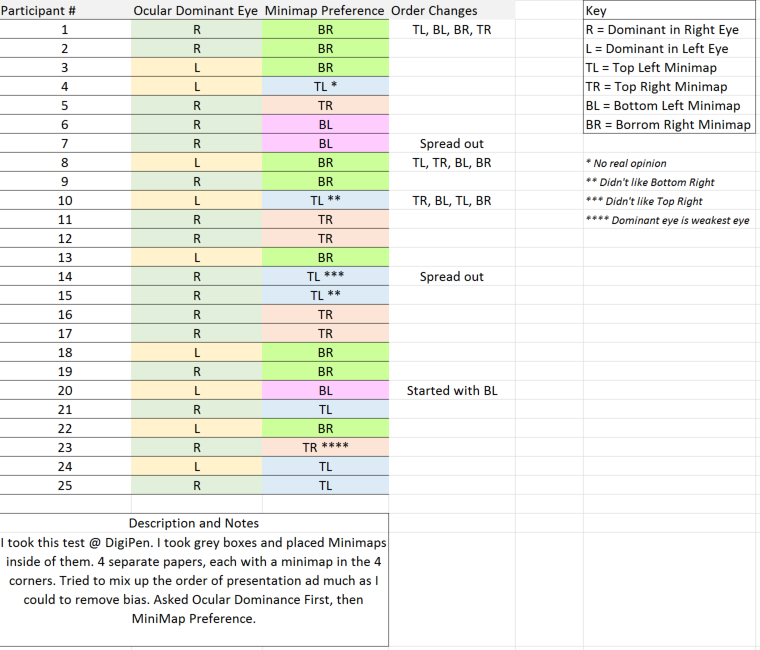